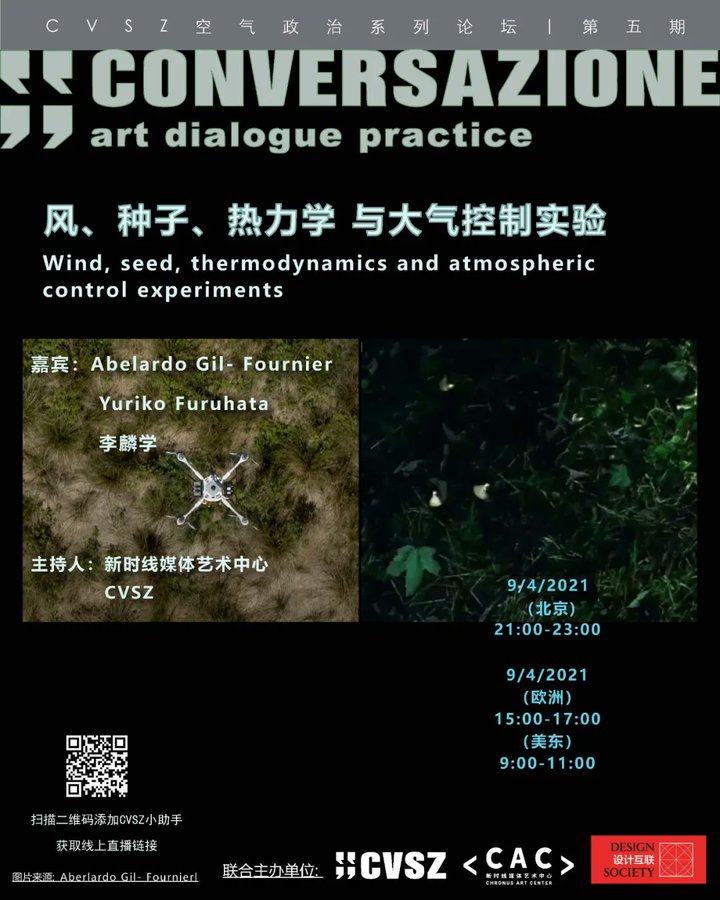 Co-organized by Chronus Art Center (Shanghai), CVSZ (Beijing) and The Design Society (Shenzhen), we participated in the panel Yuriko Furuhata, Li Linxue and I, moderated by Yixuan Cai.

Info about the panel at the Chronus Art Center: https://mp.weixin.qq.com/s/MUwbZaHtvWH7Biyt4UdDGA

Info about the panel from the Conversazione collective: https://mp.weixin.qq.com/s/l8B46W79FTRCMzYshMxR5Q

In recent years, an increasing number of scientists, engineers and artists have drawn attention to the wind, seeds, atmospheric environments and experiments of the natural world. The study of media ecology is moving away from the traditional ecological framework underpinned by the Toronto School of Communication and the concept ‘media as environments’ represented by Marshall McLuhan. This has led to a more materialized, fundamental and systematic study of technological media that become environmental.

The essay film Seed, Image and Ground by Abelardo Gil-Fournier and Jussi Parrika poses a question: how does wind become an image? The gusts created by a helicopter substituted for natural winds blow across earth’s surface, influencing weather production, farming operations and transformation of human apprehension of plants, aerial operations and land. Earth’s surface is captured and transformed into data images by aerial application technologies. They present atmospheric patterns from the ground, embody planetary surface patterns in the cloud, portray vegetation as images and use images to define the land. What kind of technological logic and culture is demonstrated by such large-scale visualization and imaginization of wind and atmosphere?

In her book Climatic Media: Transpacific Experiments in Atmospheric Control, art and media historian Yuriko Furuhata argues that, regardless of its applications, atmosphere engineering develops in a way inseparable from the question of security of our living space. From its military application, to its civilian application that ensured food and water security, atmospheric control closely entwined with the geopolitics and biopolitics of the twentieth century. The sense of insecurity posed by atmosphere modification is a rule for the advancement of modern technology. People attempt to overcome the anxiety caused by technology via the innovation of technology, such as gas masks, air purifiers, etc., but this also led to a vicious cycle of constant phobia.

The utilization of microclimate control appliances such as refrigerators, air conditioners and humidifiers in modern architecture allows proactive manipulation of air temperature, humidity and composition. When the building interior is isolated from the external environment, the closed indoor system also becomes a cause of massive energy consumption and environmental crisis. At the same time, the rich constructive logic of architecture per se encounters the problem of homogenization due to the insertion of indoor climate control appliances. In the system of thermodynamic architecture, substance, energy, climate, form, body and system bridge each other and constantly interact. Professor Li Linxue from the College of Architecture and Urban Planning in Tongji University summarizes the mechanism of energy flow in architecture as a process of ‘energy capturing’, ‘energy synergy’ and ‘energy steering’. Thus, energy flows and transforms among climate, architecture system and the human body. As the American architectural theorist Sarah Whiting pointed out, air becomes the protagonist of the spatial organization in thermodynamic architecture, balancing and maintaining the energy flow of the architecture as a form of material reality. How can thermodynamic architecture be actualized in the context of modern China?

In this talk, the three guests will analyze the continuous climate modification of land, sea and sky in the industrial and colonial history of mankind from their own research perspectives, and critically respond to human desire to live in a ‘controlled climate’ and the relentless exploration of living space.

Yuriko Furuhata, Associate Professor & William Dawson Scholar of Cinema and Media History in the Departments of East Asian Studies & Art History and Communication Studies and World Cinemas Program at McGill University. Her book Climatic Media: Transpacific Experiments in Atmospheric Control traces the technological, institutional, and geopolitical connections between Japan and the United States that led to the historical development of artificial fog, weather control, cybernetic environments, metabolic architecture, and networked computing in the 20th century. Furuhata extends the scope of media research in consideration of the technology applied for chemical modification of earth weather and social modification of people’s behaviour. She investigates a series of technologies such as cloud seeding, artificial snow, computing for weather forecasting and control, cybernetics of urban planning and policing, Nakaya Fujiko’s fog installations and the architecture experiments by Tange Lab and Metabolists in a bid to examine the history of transpacific GeoMedia and climate change.

Abelardo Gil-Fournier is an artist and researcher. His practice addresses the entwining of image surfaces with the living crust of the planet. Fournier holds a PhD in Arts from the Winchester School of Art (UK), currently works at FAMU Prague (Czech Republic) as part of the project Operational Images and Visual Culture and is a member of AMT Archaeologies of Media and Technology. His works are based on the dexterous design of platforms (installations, appliances and studio) which are considered as open mechanisms for the intersection of art, episteme and politics.

LI Linxue, Prof. Dr. Linxue Li is a professor and Ph. D Supervisor at College of Architecture and Urban Planning，and the dean of College of Arts and Media of Tongji University，principal architect of ATELIER L+，chairman of special column in T+A, visiting scholar at Graduate School of Design Harvard University in 2014,and Graham Wills Visiting Professor of School of Architecture at University of Sheffield from 2020 to 2022. In 2000, he was selected by the Presidential Program “50 ARCHITECTES EN FRANCE” and studied in Ecole d’Architecture de Paris-Belleville. Linxue Li tries to establish his architectural teaching, research, practice and international exchange based on thedefinite theoretical discourse and to integrate the production of knowledge and production of buildings in the field of architecture. His main fields of researches include thermodynamic ecological architecture, public architectural conglomerate, and frontier for contemporary architectural practice etc..